It was released this week with a big fanfare at the annual Sage conference in Nashville US.  Instead of keeping the version numbers that we have been used to for many years they have called this simply Sage 300 ERP 2012.  It is version 6.1 in old money.

Not much has changed in the core functionality of the product but there are a number of enhancements that make this a worthwhile upgrade. 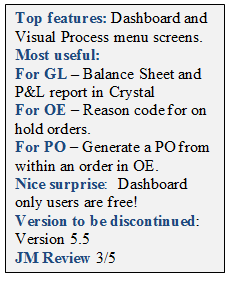 For me the most significant is the browser dashboard.  There have been a few attempts at this in the past but this one looks excellent, mainly because the graphics themselves are simple, to the point, and most importantly you can add to them.  When you drill down from a dashboard a Crystal report pops up.  Behind the scenes they have designed this so that Dashboard users do not use a Sage 300 licence, in other words they are free no charge, gratis !  This is fundamental to performance management as many people outside of finance need access to this information.

Next on my list is this new “Visual process” view which I believe is a bit of technology taken from Sage X3.  Simply it’s the ability to create an active flowchart of processes.  You can click on any element in the flow chart, such as “pay invoices” on an AP flow and it will open the appropriate form.  Existing users may not find a use for it but for businesses who want to roll out the system into new branches and companies then this gives fantastic control and simplicity.

My next favourite is a built in Crystal report that provides a Balance Sheet and P&L based on the account groups in the GL.  I know that this should have been standard from version 0.0 but it’s great that this is here.  No more reliance on the Financial Reporter through Excel or F9 to quickly print the P&L.

There are other features like improved selection options on reports, a “reason code” for orders on hold, the ability to lock fiscal periods by module, improved help documentation, user name display and improvements in installing service patches.

The release of a new version means the discontinuation of support of the 5.5 version according to the law that the developer cannot support more than the prior 3 versions.

As I said there were no real functional changes.  This is a pity and it’s for this reason that my overall assessment is reduced to a “3 out of 5”. Sage 300 is a great system with an excellent foundation so it is disappointing that Sage are not making more of an effort to improve the user side of the software. 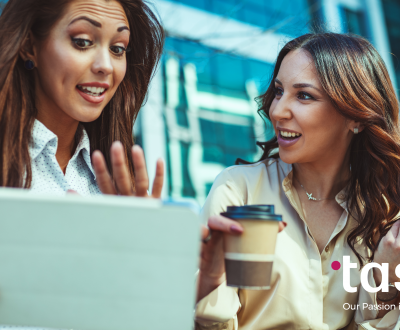